When the scores don't reflect how truly awesome the day was ...

Where to begin.  Sunday was Lissell's first recognized Training event, and only my second one (with the first being almost 3 years ago!).  When I walked the course on Saturday with Kelley and Katie, I was only slightly nauseated by fence 3, a bit more by 4 and wanted to crawl into the ditch at 6.  By the time we got to the massive ramp at 8 or the log into water 11 or the 1-stride angled brushed at 16/17, I figured "whatever will happen will happen."  Not only was the course big (in my new-to-the-level opinion) but it was also long.  Lissell is fit, but I always worry.

So anyway, dressage went SO well on Sunday morning.  Jane was able to come over to warm me up and that was just the thing I needed.  Lissell was so wonderful in her test, and I was really hoping it was a 39-40 test.  I guess the judge saw what I felt, and we got a 39.6!  Now I just need to work on keeping her forward, forward, forward into the connection.  I must say that the Micklem bridle has been a god send. 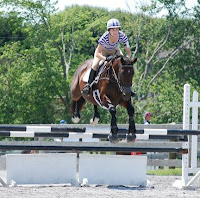 Next up was stadium.  I was so thankful to have Kelley there to warm me up after the disaster at Loch Moy.  Her reminders of keeping Lissell straight between my legs were just what I needed, and I would say that we redeemed ourselves in stadium this week.  We did pull two rails.  I'll take blame for one of them.  ;-)

Then we were off to cross country.  Kelley had to go get her horses ready, so I was left with warmup instructions.  Thankfully Sue was there to babysit me, take me to the start box, etc.  All my worries about the jumps being too big were put aside after the first 3 fences.  I guess all the fitness work is paying off, because she absolutely springs off the ground now.  I do wish she didn't get quite so close to them, but that's something we'll just have to work on.  Anyway, galloping to fence 4, I had Kelley's directions clearly in my head.  Ride up to it!  I definitely didn't have enough gas in the tank and we had a silly stop.  I came around to it again, popped over it and off we went. (I did later find out that fence 4 was causing problems all day which made me feel a bit better).  The ditch at 6 was a non issue, and the jump into water was fine (the growling was probably unneeded).  The angled line was awesome.  And then my dumb ass made a dumb ass move at the corner and softened to it, and Lissell was exit stage right.  Argh!  So very frustrating!  I could have kicked myself right then and there.  But we jumped it nicely the second time around and finished up with plenty of horse still underneath me.

So lessons learned ...
1) Don't get cocky at the end of the course.  I honestly can't remember ever having 2 stops on cross country.  I think that's because usually after one stop I get so mad, that I make sure I don't have another one.  But this is Lissell, and I can't get mad at her.

2) Lissell likes it if you give her a pat and tell her she's a pretty pony after fences.  I could literally feel her take a breath with each pat.

3) Lissell is pretty bad ass!  And it took my very non-horsey dad to put things into perspective for me yesterday.  After cross country I was of course a little disappointed in myself for having two stops, he turned to me and said, "Margaret, your horse is TWENTY years old ... she jumped everything you pointed her at ... what more can you ask for??"  Thanks dad!

4) Without Grantley to snuggle with post-cross country (their times were much later in the afternoon), Lissell gets a little wild at the trailer.  Hopefully they'll be reunited at Seneca in two weeks.

All photos courtesy of Christie Baker.  Thanks Christie!
Posted by Mythic Landing Enterprises, LLC at 8:00 AM