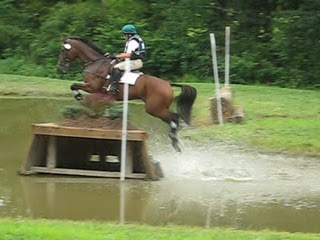 MLE client Courtney Cooper of C Square Farm and her homebred gelding Who's A Star (aka "Tag") have had a very successful summer season! They've been in the top 5 after dressage at their last three events, and ended up winning the Intermediate division at Waredaca in August. Tag will continue at Intermediate this fall, and is aimed for the CCI** at Fair Hill in October. Go Courtney! Go Tag!

Recently Courtney was asked to blog about her experience at Waredaca for the Professional Riders Organization. You can read those here: Saturday and Sunday.
Posted by Mythic Landing Events, LLC at 2:55 PM No comments: 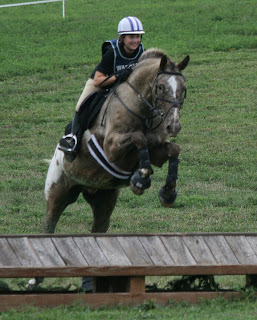 So a lot has happened since my last blog post. Moosetracks did his 2nd USEA Horse Trials at Waredaca. Lo and behold, the horse was awesome! I took him over to friend Julia Beamish's Mayadinya Farm on Friday for a flat and jump school in her lovely arena and it was just what he needed. I was only planning on jumping a few fences, but he was rocketing over everything like it was Preliminary height. So we just kept on jumping until it wasn't quite as exciting and called it a day. After a small mishap while lunging before dressage, he gathered himself together, and put it a solid BN test. I definitely rode quite conservatively, and my coach Kelley Williams (of A Bit Better Farm)told me to really go for it next time. Hopefully this good behavior continues, as after 2 double-clear jumping rounds, he moved from 16th to 7th in a very competitive division of 23 horses. Go Moosetracks Go!

The next Friday, owner Holly Erdely took over the reins and brought him over to a Stephen Bradley clinic I organized at Oatland Stables in Brookeville, MD. The horse did me proud and took care of Holly like a veteran. Woohoo!

Lissell is battling a nasty skin infection that's required daily (if not twice daily) attention. She's such a princess. But she's getting stronger and stronger, and more balanced with each passing day. She even voluntarily cantered out on the trail! Love this mare!
Posted by Mythic Landing Events, LLC at 2:43 PM No comments: 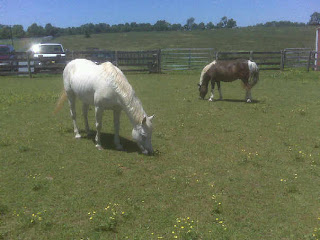 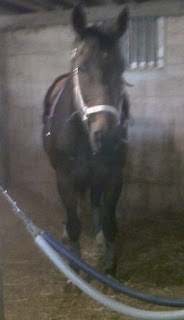 Finally, The Ponies! Once or twice a week you'll find me at a neighbor's farm exercising their ponies. The ponies are meant to be for the family's children, but thus far the kids don't have much interest in riding (I'm hoping that will change this fall!). In any case, Pony #1 is named Swift (paint pictured). Swift was a champion games pony and I'm guessing his age to be at 30+. Naughty is his middle name, and I approach every ride with him expecting to fall off. Thus far, I haven't actually fallen, but I figure I should keep my expectations low with this one. His latest trick was flipping his tongue over the bit, resulting in the addition of a flash to his little bridle. Pony #2 is named Snowflake (grey pictured). Snowflake is 90% lovely. But she is a pony mare, so if she's having a bad day, WATCH OUT! I could go on and on about these little guys, but work is calling. More later!
Posted by Mythic Landing Events, LLC at 8:48 AM 2 comments: