The story behind the photo

I posted a photo of a set of empty cross ties earlier today and thought it deserved a little bit more of an explantation.  Here is the photo I posted ... 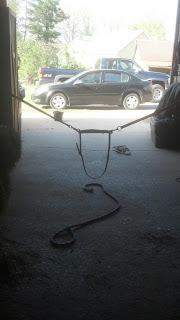 What you couldn't see is that she was calmly standing right next to me.  Her expression read a bit of "WHAT was Katie thinking moving that blanket next to me!?!" And a little, "Seriously, I don't even know why you put me in those things." But the overall theme from Lissell would be, "You stupid humans."

Why Lissell doesn't run away when she breaks the cross ties is beyond me.  I'm guessing it's because she prefers to stand there laughing at me, but who knows.  At the end of the day, she makes me smile.  Sparks on the concrete and all.

Posted by Mythic Landing Enterprises, LLC at 8:12 PM No comments: 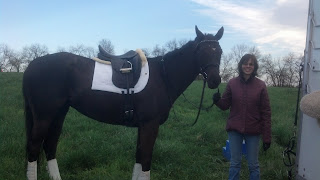 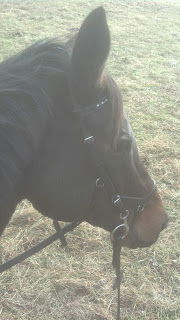 Oh where to start.  Big momma mare has had a bit of a rough winter.  Unfortunately she had another flare up of lymphangitis in her left hind leg which just sucked.  (Sorry, there's no other way to put it!)  As much as I love going to the barn and being with Lissell, twice daily trips to administer various injections and medications isn't really what I have in mind (especially when temps are hovering in the teens).  But such is life and you move on.

Luckily we were more prepared to treat this bout as we had had to experiment enough last summer, that this time things seemed to turn around much faster than the first time.  Until your horse gets a cut right below their hock the day after they were weaned off all drugs.  And then the cut gets infected, and your horse is lame for a week.  And then you have all of the filling out of the leg except for a fluid-y bump on the front of her ankle.  And when your vet ultrasounds it, they find a small tear in the connective tissue between the skin and tendon.  There was many a time, when all I could think was, "You can't make this sh*t up!"  But again, all you can do is treat the issue and move on.

By some miracle, Lissell remained fairly rideable throughout this entire time.  There were times when all we did was walk, but the walking helped with the circulation in her leg and made things a bit better. Plus I think it helped with both of us sanity-wise.  We were also able to work on our dressage a lot.  And I mean a lot.  I do think we both reached our breaking points at different times (What can you expect of two eventers doing nothing but flatwork for 7 weeks!?).  For Lissell, I think it was when I hopped on bareback w/ a halter to walk her out to her field and she made her bucking intentions clear and I leapt off.  For me, I think it was when I discovered a puncture on her front ankle and practically curled up in a pathetic ball on the barn floor.  But really, what can you really do except pick yourself up and move on.

I must admit that the thought of retiring Lissell crossed my mind more than once this winter.  And I swear to you that on the days when I gave it the most thought, I would get on Lissell and she would either try to buck me off, run off with me or start snorting at a pile of fence boards on the ground.  Even today, I walked hills for a few minutes and then went in the indoor to do a little flatwork in my jump saddle.  It was like Lissell had springs in her hocks and was floating across the ground.  In my jump lesson with Kelley last week, we were throwing in some flying changes across the diagonal and I can only describe them as being expressive, obnoxious and hilarious all at the same time.  I keep reminding myself that any and all of these issues could (and probably would) happen if she was just sitting in a field not doing anything all day.  So I guess we'll just keep moving on to the next adventure.

I'm not sure what we'll do next.  I've already done more with Lissell than I could have ever dreamed of, so there's not much left to do.  I was looking back through some older blogs about her, and at one point I said that my goal with Lissell was to learn as much as possible from her while I still had her.  And while one of the things I've learned is that she's an incredibly complicated ride, she's also very generous in her own way.  She may like to fling her head into the air at the most inappropriate times, but when it comes down to it, she'll also catch you when you try to fall.  And when I just can't bear to give her another shot, she just gives you that "it's all good, I don't mind" look and you make it through another day.  As corny as it sounds, this horse has taught me a lot about moving through life and just keep on keeping on regardless of what comes your way.

I do want to take a quick moment to thank all the people that have helped me keep my sanity through this latest ordeal: Dr. Roger Scullin and Dr. Jim Lewis of Damascus Equine Associates, Kelley Williams, Kim Keating and Tiina Gray of A Bit Better Farm, Jane Seigler of Dressage at Sundown and Mike Poe of Alpha Farrier Services.  And of course Scott, Sue, Jenn and Nicki for knowing when to hand me a tissue and when to hand me a drink!


Posted by Mythic Landing Enterprises, LLC at 10:59 PM No comments: