If you're a friend on facebook, you're probably sick of my gushing posts about Lissell.  So if you're expecting anything different today, you'll be disappointed.

We had lessons with Susan Graham White today, and I've started to really look forward to my dressage lessons on Lissell.  Who knew!?  Today's theme was establishing a steady, solid connection by engaging Lissell's hind end. Over the past few months, Lissell's balance has been improving, but she can sometimes get stuck, and it's like her hind legs just stop moving.  So we've been working on keeping her active behind.  The cool thing is that Lissell can now take a correction (aka a sharp tap from the whip), and instead of having a meltdown, just does what she's supposed to.  Yay!  Success!

From there, we moved on to the counter canter. No biggie, Lissell and I have been practicing this, but just for short periods stretches.  We completed 2-3 loops of the arena and I'm thinking, "Wow, go us!"  Then Susan tells me to come in on a circle around her, and the warning signs start going off in my head.  I was thinking there was no possible way this was going to end well.  But Miss Lissell just settled into it. Wowza.  Then Susan said to bring her nose to the inside of the circle.  Again, I was thinking this would be the breaking point.  No possible way.  But Lissell just did it, and did it with this, "What's the big deal!?" type of attitude.

Back to the trot, and I think I would have done a happy dance if possible.  Next up was the right lead, which is typically Lissell's harder direction.  Not tonight!  She was straighter, more balanced and had a better rhythm.  I think it also helped that I had a more confident attitude towards it, and instead of waiting for the blow up, was relaxed and concentrating on the movement.  So back to the left we went, and perfection.

Seriously, this mare just astounds me.  She shows up ready to work every day, and has become so incredibly rideable, I just can't believe it.  If I think too hard about how far this mare has come, it brings tears to my eyes.  When I took Lissell back, I would have been happy to just watch her eat grass every day.  When I started riding her again, Kelley asked me what my goals were, and I remember saying something about wanting to soak up all the learning Lissell had left to give me.  Never in a million years did I think this is where we would be today.  The lessons I learn from her every day are priceless. Listen to your horse, and you'll be rewarded.
Posted by Mythic Landing Enterprises, LLC at 9:11 PM No comments: 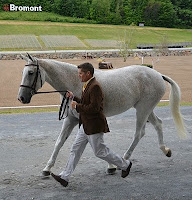 Stephen will be back at A Bit Better Farm (Brookeville, MD) on Monday, March 12th.

Lessons are limited to 3 riders and cost $110/rider.  We have to be done by 5pm, and I'll just work the schedule backwards from there.

So ... e-mail me (margaret@mythiclanding.com) if you'd like a slot!


PS I have space left with Susan Graham White next Monday, February 20th.  Let me know if you'd like a slot!
Posted by Mythic Landing Enterprises, LLC at 8:16 AM No comments: