Katie Wherley Clinic on Saturday, April 7th
Get Ready for the Spring Season with Katie's expert guidance!  Top professional Katie Wherley, of Rock Solid Training in Middletown, Maryland, will be coming to Bennett's Creek Farm again in April. Katie, a graduate "A" pony clubber, has trained and competed horses to the Advanced level of eventing, and has significant experience in the jumpers, hunters, and dressage.


Glenda Player's Biomechanics Clinic on Saturday, April 14th
An all-day clinic at Glenda's Playland Farm in Union Bridge, Maryland.  The morning starts with an Unmounted Session, which are oriented toward achieving a high awareness of one's own habits and biomechanics, thus aiding each individual rider to a heightened performance once re-mounted.  This is followed by mounted sessions where you apply what you learned in the unmounted session to your riding. Group sessions allow everyone to learn from each other in a positive and encouraging environment. These are fun and enlightening days!

Posted by Mythic Landing Enterprises, LLC at 7:03 AM No comments:

Get ready for the spring season with Mythic Landing Enterprises!  We're continuing our popular clinic series with two dates this month.  Keep reading to learn more about each clinic opportunity with instructors Stephen Bradley, and Susan Graham White. 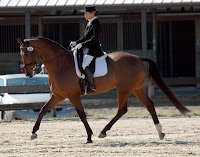 Not only is Susan an active upper-level dressage competitor, but she also judges at many of the area shows where you compete. Susan is an FEI dressage rider and trainer based at Wolfhaven Farm in southern Maryland. She has been an active instructor, trainer, and competitor in dressage for 25 years, and has successfully trained and coached students through the Advanced 3-day level in eventing, and to FEI levels in dressage. Learn more about Susan at www.sgwdressage.com.
Format: 45-minute private lessons; Cost: $125/lesson

Stephen enjoys teaching all levels of riders from beginners to the advanced competitor. His enthusiasm, talent for communication, and ability to inspire confidence in the horse and rider especially make him a hit with the pony clubbers! When trianing with Stephen, you can be confident that you will receive expert instruction for your level of riding.  You can learn more about Stephan at www.stephensbradley.com.
Format: 1.25 hour group jumping lessons (3 persons maximum); Cost: $110/group lesson
Please contact Margaret Rizzo at margaret@mythiclanding.com or (301) 502-8929 to sign up for any (or all!) of the clinics.  Cash, checks and credit cards accepted.

A full list of activities for the year can be found on our web site (http://mythiclanding.com/activities.htm) or facebook page (https://www.facebook.com/pages/Mythic-Landing-Enterprises-LLC/231445710243540).  Be sure to check back often for updates.  Or just tell Margaret to add you to our e-mail list.
Posted by Mythic Landing Enterprises, LLC at 11:33 AM No comments:

Perfect weather for some jumping with Mr. Bradley

Yesterday was just what I needed.  An entire day in the warm sun at A Bit Better Farm.  I may have had a long sleeve shirt (or 2 or 3) on, but seriously, I could have taken a nap on the roll top in the sun.  Now I know what it's like to be a dog and nap in that perfect sun spot on the floor.  But of course it's a clinic day, so there was work to be done.

We had a full day (18 riders) of lessons with Stephen Bradley.  And the awesome weather drew out a bunch of auditors (remember that auditing is FREE!), which was fun.  As an added bonus, some of these auditors stepped in as jump crew.  Yay!

I was in the first lesson of the day along with Glenda Player on her stallion PL Diamond Hill, and Rumsey Keefe on her adorable Gmork.  Diamond always makes me smile with his enthusiasm for jumping.  This stallion is the real deal.  And I love watching Rumsey ride ... she makes it seem so easy!

Lissell was ready to GO the minute we stepped in the ring.  I was honestly surprised because she was practically falling asleep in the cross ties.  But she could have been in a Back on Track zen.  In any case, she was great, just great.  We worked on regulating her stride, to and away from the fences.  Lissell has this sneaky little habit of slyly lengthening her stride to the fences.  She doesn't bolt at them, so in a way, she's being as polite as she can, while at the same time blowing me off.  But what can you expect ... she's a thoroughbred mare with a lot of miles under her belt. We also worked on keeping her hind legs active through the turns (a definite theme that I've been hearing from all of my instructors over the past month). And the last big lesson for the day was me holding her out in the turns with my inside leg so she doesn't fall in.  I think the only time we made Stephen laugh was when Lissell did the 3-stride bending line to a skinny in a direct 2 strides.  Ooopsie!

The most shocking (and awesome) part of the lesson, was learning that I can in fact sit on my horse and RIDE HER without her having a complete meltdown about it.  I was joking that I think my horse is finally getting broke as she approaches her 20th birthday.  But in reality, I'm thinking that I'm finally learning to ride her.  I asked Stephen later in the day if he thought I should try a different bit on Lissell to help with her tendency to drop her head so low between fences or if I should just learn to ride better.  He politely chose the latter option.  hehe.  Lissell may come off as a hot head, but this mare has the patience of a saint.

Later in the day, Kelley had an awesome flat lesson on Bomber, complete with a few flying changes.  I always forget how good Stephen is as a dressage instructor, so it's nice to be reminded of that. Kelley heads down to Southern Pines II next week, and then back down to The Fork for the Advanced move up.  Yay Kelley!

Mary's students Kari and Alison came over with super mare Kali and Mary's old gelding Knick.  It was interesting to watch Kari, because her mare has the same tendency to bury her head between fences. And Knick makes me laugh with his groaning and obvious displeasure at being told he doesn't know everything about jumping like he thinks he does. Kelley joined this lesson with Toby who put his big boy pants on and was a star.  This horse will be a great horse for someone looking for an athletic prospect.

The last lesson featured my favorite appaloosa, Moosetracks and good friend Holly.  ABBF'er Katie Cummings also joined this lesson on her new horse Ringo.  They both did great!  Can't wait to see these pairs out competing this spring/summer.

Last note of the day.  Dr Scullin came out to check on Lissell's ankles.  She's had some swelling in them for the past few weeks, and keeps banging them into something (hay feeder maybe??).  But she is older and arthritis is probably likely as well.  So we flexed her, and let's just say I never want to do that again!  So long story short, we decided to give her a shot of Legend and see what that gets us.  Oh yea ... this is Lissell's first Legend ... ever.  I think we should get Lissell a cape and re-name her Wonder Woman!

Until next time ...
Posted by Mythic Landing Enterprises, LLC at 8:04 AM No comments: 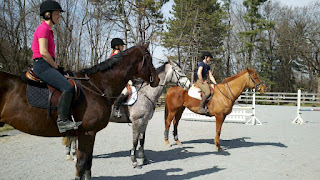 Posted by Mythic Landing Enterprises, LLC at 2:46 PM No comments: 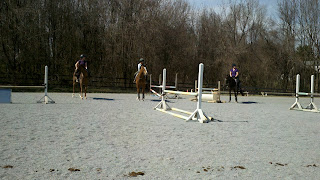 Posted by Mythic Landing Enterprises, LLC at 1:54 PM No comments: 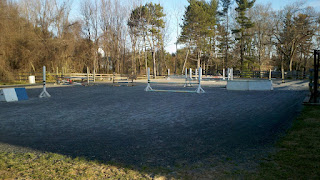 Don't forget to stop by and audit (jump crew is always appreciated too!). We have chairs, refreshments and plenty of watching available all day!

Posted by Mythic Landing Enterprises, LLC at 8:28 AM No comments: