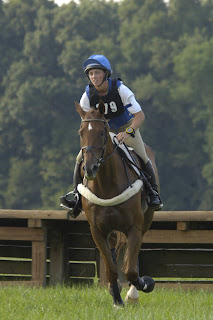 Katie is a local upper-level event rider located in Middletown, Maryland. I was introduced to her through a mutual friend who has been taking lessons with Katie for a few years. Like many professionals, Katie has all the talent in the world, but just needs "the horse." She's come so close a few times, but horses are horses. Besides building her lesson and training business, I'm trying to find an owner or two to buy that big time horse for Katie.

The cool thing about Katie is that she takes her time. She likes to find her horses at the local race tracks and let them tell her what they want to do with their lives. Besides producing upper level eventers, Katie has also sold horses into the hunter ring for a fair bit of money. So while Katie would love to find owners that want to keep a horse in training with her, she's happy to work with people wanting to invest in a horse for re-sale.

If I had the money, I'd sponsor a horse for each of my clients. Maybe I'll find that money tree while trail riding this week. :-)
Posted by Mythic Landing Events, LLC at 9:34 PM No comments:

Sometimes I get to ride too! 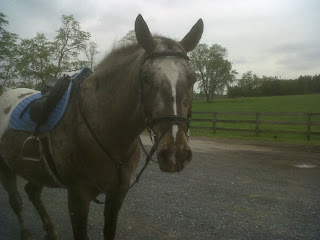 In between all the craziness involved with running MLE, I do find time to ride. As is the case with most professionals, my own horses get pushed to the bottom of the list. So we'll have to talk about them at a later time.

Now let's meet Maine Moose Tracks! He belongs to friend Holly Erdely, and he's a 17.2h Appaloosa/Belgian/Thoroughbred cross. To be more specific, Moosetracks is 1/8 Appaloosa, 1/4 Belgian and 5/8 Thoroughbred. Yup, you read that right ... someone bred this on purpose too! But in all seriousness, I ride this big guy 1-2 days a week. As Holly puts it, I'm his personal trainer. I push him to do the things he can't do and lay down the law when he tries to rebel.

I've been working with Moosetracks consistently since last November. Some key words for his training program include: obedience, suppleness, go forward, and put your f-ing head down. To say that Moosetracks has been a challenge is an understatement. Thankfully with some consistent work, he seems to have developed a bit of a work ethic, albeit a small one. But hey ... I'll take it!

This March he cracked his right hind coffin bone, but thankfully it was soooooo slight, that we didn't have to coop him up in a stall. Also thankfully I was allowed to hop on once a week for a walk work out on good footing so when we got the go ahead to go back to work, I wasn't dealing with a feral beast.

Fast forward to this past weekend, the Waredaca Starter Horse Trials. Thankfully working there has it's benefits and I was able to sneak him into a BNYR division for a dressage test. Now Moosetracks and I had just had one of our biggest blow outs earlier in the week. Needless to say, I wasn't quite sure what to expect for our dressage debut. I gave myself a solid 40 minutes to warm up, expecting him to misbehave. So imagine my surprise when he just put his head down and got to work. I had this moment of, "well shit, now what?!" but then decided to just keep him supple with short bursts of work. Moosetracks continued to surprise me by staying with me the whole time, even when he got tired. And boy did he get tired! For the first time in a long time, I actually felt a little bad for him. It was blazing hot and here he was actually trying to be good.

So in the ring we went, after about 10 minutes too long of warm up. And out we came with a respectable 37 and a broken arena board. Apparently balancing a 17.2h tired draft-cross is a bit more difficult than anticipated, and as he rolled down the slope at the canter, we almost left the arena. Luckily a sharp right spur kept us in, but left a dressage board knocked over and in pieces. Oops! I'll probably be getting harassed for that for months. Ah well. I tried getting off at the end of my test to fix it but to no avail.

So onto the next adventure. Stay tuned!
Posted by Mythic Landing Events, LLC at 9:09 PM No comments: 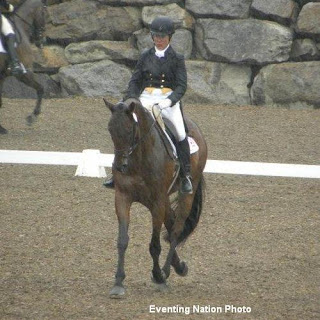 So something I forgot to mention in my post about Bromont ... KUDOS to Courtney for wearing her helmet in dressage!

Helmets for dressage seem to be the topic du jour. Personally I wear a helmet every time every ride. I like my brain too much. For me, not wearing a helmet was never an option. I grew up riding at Waredaca in their lesson program where helmets are mandatory. By the time I got to the level where some would consider a helmet optional, I was teaching lessons, at which point I was expected to wear a helmet as a good example for my students. Waredaca is home to four-star eventer Gretchen Butts, and I can honestly say that I don't think I've ever seen her without a helmet.

For a brief period I wore a hunt cap for dressage at competitions, mostly because I thought it was a sign of maturity. I was 18, riding a good horse, and kicking butt (at least I thought I was). I even fell off a clients horse in dressage warm up one time when the jackass exploded into a bucking fit culminating in the classic drop his shoulder and spin move. I didn't land on my head though, so I figured I was still good. Then I was hacking out my old reliable I'll-do-anything-with mare (with a helmet on), we were just meandering around at the walk and BOOM! next thing I know I'm being lawn-darted across the turf field. My only guess was that a horse fly landed on her or a bee stung her. I didn't land on my head this time either, but was limping for days after. So from there on out, I figured if I could fall off my lovely mare at the walk, I should probably wear a helmet.

But back to Courtney. I've known Courtney for a few years now, mostly only seeing her at shows where she sported a hunt cap for dressage. Then I saw her at Waredaca a few weeks ago, and she had her Charles Owen GR8 on for dressage. I asked her about it, and she said, "Well I figured that I always wear a helmet at home, so I should probably wear it at shows." Pretty simple logic there!

Allison Springer has made a helmet pledge and even wore a helmet in dressage at Rolex. I remember seeing her trot in and thinking, "You go girl!" Then comes Bromont in Canada, when two riders (Courtney and Sarah Cousins) wore helmets in dressage. As John on EventingNation pointed out, that's one more than Rolex.
Posted by Mythic Landing Events, LLC at 1:39 PM No comments:

While I have very little to do with how well my clients ride (all of them can ride circles around me!), I still find a lot of pride in their achievements. This past week Courtney Cooper and Jenn Simmons headed up to Bromont with a pair of horses each. And they totally rocked it!

Courtney started off by placing 3rd and 5th after dressage in the CCI** with Havasu Canyon and Who's A Star (aka Tag) respectively. Havasu is a complete showman, so this wasn't a huge surprise to me. But I think we were all pleasantly pleased with "Baby Tag" stepping up to the plate at the young age of 7. I met Tag two years ago, and I can't even begin to describe how much this horse has grown up. For those of you that don't know, Tag is the first of Courtney's homebreds. And the crazy part is that Courtney has 5 more homebreds waiting in the wings! By the end of the weekend, Havasu added a little time and 1 rail to finish 7th. Tag had a green moment on cross-country to drop out of the ribbons, but you know what ... the horse is 7 ... he's allowed a green moment here and there!

Jenn took JB's Star in the CCI*** and Millenium Kiwi in the CCI*. Every time I see JB, I'm still amazed that Jenn found him in a field in Middleburg because his owner had abandoned him. I joke that I'm going to start scouring the fields of Middleburg looking for my Advanced horse. ;-) This is JB's first season at Advanced, and he's just eating it up. He ended the weekend in 9th at his first CCI***. Not too shabby! And then there's Kiwi ... the preliminary prodigy. He's competed at practically every Prelim on the east coast, and just keeps showing his worth, this time placing 7th in the CCI*. Kiwi is for sale. Someone better snatch him up quick before he moves up to Intermediate and costs more.

Ok, enough for today. I have 23 e-mails to answer!
Posted by Mythic Landing Events, LLC at 12:28 PM No comments:

I've decided after creating blogs for all of my clients, that it was about time I created one for myself and Mythic Landing Events. You'll be able to check here for all the latest happenings with MLE and our clients.