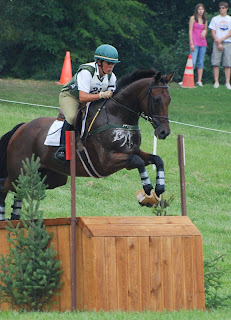 Check out MLE Courtney Cooper on SportHorseNation.com as she shares her Top 5 Tips for Selling Horses. Courtney has already sold close to 40 horses this year, and shows no signs of slowing down!
Posted by Mythic Landing Events, LLC at 2:42 PM No comments: 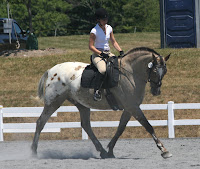 Horses are such humbling creatures. My ride for the weekend was Holly Erdely's Maine Moose Tracks. As I said in an earlier post, I started riding Moosetracks regularly when Holly was recovering from surgery this past winter, and continue to help develop this talented big guy as he goes through a bit of the terrible teens. This horse has made huge steps forward in his training over the past few months (with the help of super trainer Kelley Williams), so I had reason to look forward to his first recognized competition this weekend.

Then comes the small step back. Any competitor can tell you that one of the biggest challenges is recreating the brilliance from home in the show environment. For whatever reason, Moosetracks didn't want to play the game yesterday. And let me tell you, when you're 5'2" and your 17.2h draft cross decides he doesn't want to play, there's only so much you can do! Thankfully I avoided taking out a few pony clubbers as I tried to settle my partially rearing and lunging beast. After my somewhat embarrassing dressage test, I came out the ring and continued working until good behavior was re-established.

Stadium was another step forward. Warm up went according to plan and he jumped quite well, although a bit green, with me taking the time to do simple changes to ensure he was balanced to the fences. Cross country started out as planned. A nice easy canter over the first few fences. I knew I needed a little extra encouragement going into the first water and promptly dropped my whip. Argh! Not what I wanted to happen at fence 5! But onto the next challenge. Moosetracks continued to jump well, but I could tell he was getting a little tired. I stayed super strong in my rides to each fence, determined to give him no excuse to do anything but jump the jumps in front of him and then let him cruise at his own speed between fences. Then we get back to the little girl on a big horse syndrome, and Moosetracks quit on me at fence 10, for reasons unknown to me and my friends watching. But he finished the course and cooled out well.

As Holly (aka super owner!) cooled out her spotted pony, I changed into my trusty purple crocs and went fishing for my whip. Some people have lucky socks ... I have my lucky whip. And I've had it since I was a pre-teen, and wasn't so happy at the idea of leaving without it. I think everyone shook their heads as I went off to search. It only took a few minutes, and a few weird looks from jump judges, and VIOLA! My beloved whip lives to see another day!

So onto the next step. More lessons, more schooling shows, more conditioning. See you all at Waredaca!
Posted by Mythic Landing Events, LLC at 9:10 PM No comments:

An MLE client is going to WEG! 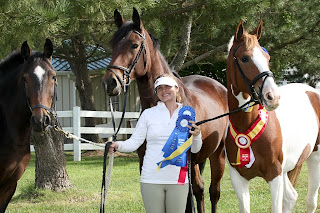 MLE client Glenda Player of Playland Farm (Union Bridge, Maryland) was asked by the Irish Village to be a demo rider for the entirety of the World Equestrian Games.

For those of you unfamiliar with Playland Farm, they are long time breeders and in recent years have focused on Irish Sport Horses. They breed their arabian mares to Irish Draught stallions (either It's the Luck of the Irish or PL Diamond Hill). Now I know what you're thinking ... they're breeding what!? But I'm telling you that these are some of the quietest, most amateur friendly horses out there. Plus they can jump!

I've teamed Glenda up with EquiChord to do a series of vlogs in her approach to WEG. Check out this first one which introduces Glenda and the horses: http://www.youtube.com/watch?v=VHiWmNVUs3I
Posted by Mythic Landing Events, LLC at 10:06 AM No comments: 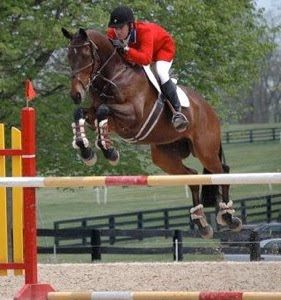 MLE has an exciting 2 months ahead of us! Susan Graham White will be coming back for her monthly dressage clinics (July 16 and August 6) and Stephen Bradley will be coming in August for a jumping clinic (August 20).

Both clinics will be taking place at Oatland Stables in Brookeville, Maryland. I have to give a shout out to Cate Cohen, who is the barn manager at Oatlands. I'm so glad we met earlier this year and have been able to team up for these clinics.

We've been lucky enough to get Susan Graham White to come up on a monthly basis. For those that don't know Susan, she is an upper level dressage competitor as well as judge. Her current young horse, Huey (pictured above), is cleaning up at shows all over the east coast. Susan is based in Southern Maryland at Wolfhaven Farm. I met Susan years and years ago when she came to teach at Waredaca. What I like most about Susan is that she's willing to work with whatever horse I bring to her. From the school horses I used to snag for lessons, to young Harry right off the track. Her hands on approach really helps riders "get it." I think at some point every SGW student has walked along with her either holding your leg or hands into proper position. One thing I know is that once you ride with Susan, you love her. Our clinics are now filling in less than 12 hours. Last clinic I finally convinced a facebook friend to come out for a lesson. This clinic her barn is bringing 4 horses. Check out Susan's web site here: http://www.sgwdressage.com

This past January a local farm asked me to organize a clinic for their barn. I had recently interviewed Stephen Bradley for an article for EventingUSA and really wanted the chance to ride with him. So the logical solution was to schedule a clinic! Despite frigid temps, the clinic went wonderfully. I actually got to ride in this one, riding Moosetracks both days and Harry in a jumping lesson on the second day. Moosetracks dramatically improved and Stephen gave me some great tools on how to deal with my sometimes ornery mount. Harry is just a spectacular jumper, but I sometimes get in his way. I learned to basically sit back and enjoy the ride. Since that clinic, I've had people ask me again and again to bring Stephen back for another clinic. Originally everyone wanted to do cross-country, but I struggled to find an affordable venue. Fast forward a few months, and Cate offers Oatlands for a stadium clinic. I scheduled the date with Stephen and 6 hours later the clinic was full with a wait list. While I knew the clinic would fill quickly, I was pleasantly surprised with just how quickly it filled. Check out Stephen's web site here: http://www.southerneditionfarm.com

If you're in the area for any of the dates listed above, I highly recommend stopping by to audit. Susan Graham White clinics run from 11am-6:45pm and the Stephen Bradley clinic will run from 3pm-7:30pm. I make it a policy to not charge for auditing, as I want to encourage people to come out and learn. (And hopefully sign up for the next clinic!) Just e-mail me for any details!
Posted by Mythic Landing Events, LLC at 8:57 AM No comments: