Another round of good news/bad news

So after a truly phenomenal run at Loch Moy, I was ready to rock it at Waredaca and end the season on a high note.  Lissell has just been going from strength to strength over the past few weeks and I just love her to pieces for it.  With the impending storm, I was a little worried as to whether I'd even be able to ride on Sunday, but thankfully it held off just long enough.

Dressage: Good news: Lissell warmed up well, not the best she's ever been, but she was obedient.  Bad news: She was quite flat and dull in her lengthenings, but such is life.  Good news: She put in a good little test to score a 35!  Yup, a 35 ... life is good!  Special thanks to Jane and Paul for coming to help.

Stadium: Good news: Warm up was gooooood.  But then we had to sit around.  Bad news: Our final few fences were "eh."  Good news: I rode her strongly and she responded for the most part.  Bad news: We pulled 3 rails and she was back to trying to chip in and blech.  Kelley said that my winter homework is to jump big oxers on long approaches without holding her to them.

Cross Country: I don't even know where to start.  She warmed up ok.  As we headed out I gave her a good whack over the first jump in an attempt to try to get her head in the game.  Fences 2 and 3 were big galloping fences, and just ok.  She really wanted to get close to them.  The technical fences at 4ab and 5 were good and I was happy.  The bank complex was awful.  The bank down was good and our turn was good and our distance was right there, and then she chipped in and scrapped over the skinny out jump.  The trakhener was good (god I love this horse for jumping all these ditchy things without blinking).  The roll top before the half coffin was ok, and the coffin was good.  Fences 10 and 11 (gallopy fences) were eh.  Then she twisted hard over the jump right before the water, and then another hard twist over the rails into the water.  And that's where I decided to call it a day.

Special thanks to coach Kelley and my friends for being SO nice and going with the flow as I pathetically burst into tears on the walk back to the barn.  And to everyone that texted, called and asked about Lissell after seeing the big R on the results.  It's nice to know that the Princess has a little fan club.  :-)

So I'm not sure what the issue is.  I felt like I was riding her as well as I could and getting her to the fences well, but it just wasn't her day.    And it's not like she's a green horse, she knows how to jump the jumps.  So back to the drawing board to see what the deal is.  Calling my infinitely patient vet now ...
Posted by Mythic Landing Enterprises, LLC at 7:52 AM No comments:

Don't forget about Courtney Cooper's Adult Riders Equine Seminars starting today!  She'll be covering a variety of topics ranging from common vet and farrier issues to how to prepare for a show.  And if you have a topic that you'd like to brush up on, just let Courtney know and she'll put it on the schedule.

http://myemail.constantcontact.com/C-Square-Farm-presents-Adult-Riders-Equine-Seminars.html?soid=1102092631929&aid=nCrFmUgMO-g
Posted by Mythic Landing Enterprises, LLC at 8:06 AM No comments: 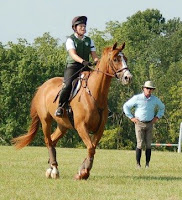 Stephen enjoys teaching all levels of riders from beginners to the advanced competitor. His enthusiasm, talent for communication, and ability to inspire confidence in the horse and rider make him a hit with riders of all levels. When training with Stephen, you can be confident that you will receive expert instruction for your level of riding. You can learn more about Stephen at www.stephensbradley.com.

Not only is Susan an active upper-level dressage competitor, but she also judges at many of the area shows where you compete. Susan is an FEI dressage rider and trainer based at Wolfhaven Farm in southern Maryland. She has been an active instructor, trainer, and competitor in dressage for 25 years, and has successfully trained and coached students through the Advanced 3-day level in eventing, and to FEI levels in dressage. Learn more about Susan at www.sgwdressage.com.

Please contact Margaret Rizzo at margaret@mythiclanding.com or (301) 502-8929 to sign up for any (or all!) of the clinics.  Cash, checks and credit cards accepted.

A full list of activities for the year can be found on our web site (http://mythiclanding.com/activities.htm) or facebook page (https://www.facebook.com/pages/Mythic-Landing-Enterprises-LLC/231445710243540).  Be sure to check back often for updates.  Or just tell Margaret to add you to our e-mail list.
Posted by Mythic Landing Enterprises, LLC at 6:36 AM No comments: