While talking with a friend this morning, I remembered that this summer is my and Lissell's 10-year anniversary.  Yup, 10 years ago my Pretty Princess Lissell got on a trailer in California and arrived in Maryland a week later.  It's really crazy to think about how it all happened and how it's all worked out.  I had only ridden her once, and while I remember liking her, I thought she was a bit of a nut job on the ground (ie she broke the cross ties that day ... something she still does today *sigh*).  But she was "free" (I just had to pay for shipping), sound and had a decent show record.

So I took a chance and Lissell became my first horse.  On her trip across the country she became a favorite of the shippers and they asked about buying her from me, but of course I said no (I think that this was actually the first and last time someone tried to buy her from me ... I guess the market for big, bay mares with attitude is limited!). Our first couple of years together were a bit rocky and not always pretty. Ten years ago I was a young professional with dreams of Rolex, and Lissell was not like my other horses.  She had a clear opinion and there was no telling her what to do.  There is much truth to the saying, "Tell a gelding, ask a mare," and I admittedly learned this lesson the hard, and slow, way.  Looking back, I'm not sure why Lissell never bucked me off and told me to get a life.  But it wasn't all bad, and I gradually got my act together and we competed a bunch, moving from Beginner Novice to Novice with our eye on Training.  Unfortunately, things were not to be and Lissell tweaked her back requiring a lot of time off.

And so we entered the next phase of our relationship: The Leasing Years.  For whatever reason, I just couldn't bring myself to give her away.  She was such a quirky creature that I just knew that she would eventually fall into the wrong hands.  So I figured I would lease her out as a broodmare and that would be that.  I had a lot of interest in her due to her Buckpasser lines and performance record, and eventually decided on a small private farm in Pennsylvania.  She got to live out 24/7 with her buds, and got a lot of one-on-one attention.  Unfortunately, the lessee's situation changed and she had to come back to me.  I kept her for a summer and spent most of it trail riding, but I had another horse by that point and he was showing some promise, so I decided to find a new lessee for her.  Of course this was the farm in Virginia, and we all know how that turned out.

I've had Lissell back for almost 4 years now and I'm not sure that I've fully forgiven myself for putting her into a situation where she was eventually starved and neglected.  I remember crying every day for a week when I got her home. I would just sit and watch her eat, checking on her multiple times a day. I would go over every inch of her body, applying various ointments and medications, apologizing to her for every cut, scrape and sore.  And so the next 6 months were spent putting my horse back together.  I remember the look on her face every time she saw me, it was this, "Oh thank goodness, you're back."  I know she's a horse, but I truly believe she had abandonment issues for a year or so. Thankfully this has subsided in the past few years.

And now, 10 years later, you could say that Lissell has become the horse that I always wanted.  We've competed a lot over the past few years, and I've schooled jumps so big that my eyes have bugged out of my head. We can successfully school on the flat without wanting to kill each other, and dressage has become *gasp* enjoyable.  Ten years is a long time to learn how to ride a horse, but in this case, it's the reality.  And while I would like to think that I've become a technically more proficient rider in the last 10 years, I know that our recent success has nothing to do with technical skills.  Simply put, I have learned to appreciate Lissell for who she is and what she has to offer.  She is a horse that will try her heart out for you, but you have to be willing to hear what she has to say about it. But when you have her on your side, the possibilities are endless and she has gone from strength to strength over the past year or so.

She is one of the special horses in this world that views it as their sole job to take care of their person. I have fallen off Lissell twice in our 10 years together.  Yes, only twice.  The first time she was stung by a some evil bug that resulted in me landing in the middle of a sod field and Lissell looking at me with this "Ooops!" expression on her face.  The second time was when she stumbled in the water while schooling and I just couldn't save it and tumbled off over her shoulder somehow landing underneath her. I remember seeing a hoof above my head and thinking "Oh shit!" and then next thing I know my horse is picking herself up out of the water while I'm sitting there wondering what the hell just happened.  Kelley said she turned herself inside out not to step on me, resulting in her falling herself.  I probably should have fallen off her countless times over the years, but she somehow knows how to shift her weight in just the right way to keep me on board. 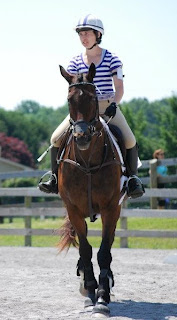 So while my lovely Lissell may not set the world on fire at shows, she is part of an elite group of horses. My special mare has served as inspiration for so much of my life and for that I will forever be thankful.  I've learned to be more patient, that good things truly to come to those that wait. I've learned to keep on keeping on, that there's no use in second guessing the past, and to just keep on movin'. I've learned to laugh in the bad times, and to be incredibly grateful for the good times.  Happy Anniversary Momma Mare!  Thankyouthankyouthankyou!


Posted by Mythic Landing Enterprises, LLC at 12:07 PM No comments: 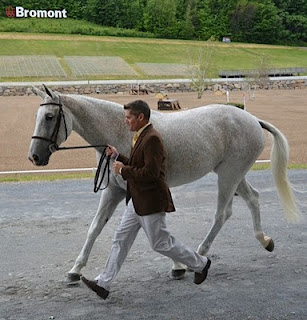 Join us for another day of lessons on September 4th with Stephen Bradley at the awesome A Bit Better Farm in Brookeville, Maryland.

Stephen enjoys teaching all levels of riders from beginners to the advanced competitor. His enthusiasm, talent for communication, and ability to inspire confidence in the horse and rider make him a hit with riders of all levels. When training with Stephen, you can be confident that you will receive expert instruction for your level of riding. You can learn more about Stephen at www.stephensbradley.com.

Please contact Margaret Rizzo at margaret@mythiclanding.com or (301) 502-8929 to sign up for any (or all!) of the clinics.  Cash, checks and credit cards accepted.

A full list of activities for the year can be found on our web site (http://mythiclanding.com/activities.htm) or facebook page (https://www.facebook.com/pages/Mythic-Landing-Enterprises-LLC/231445710243540).  Be sure to check back often for updates.  Or just tell Margaret to add you to our e-mail list.
Posted by Mythic Landing Enterprises, LLC at 8:24 AM No comments:

My sister came over for this past Wednesday's clinic with Stephen Bradley.  She entrusted me with her camera to get some shots of her on her new horse Sprocket, but while I had the camera in hand, I snapped a few shots of MLE's clinic staffer, Lucas.  :-)

So here are the shots of Sprocket: http://korizzoinc.wordpress.com/2013/08/08/sprockets-dressage-lesson-with-stephen/

And here are the shots of Lucas: http://korizzoinc.wordpress.com/2013/08/09/just-for-margaret/
Posted by Mythic Landing Enterprises, LLC at 2:55 PM No comments: