The Road to Southern Pines I 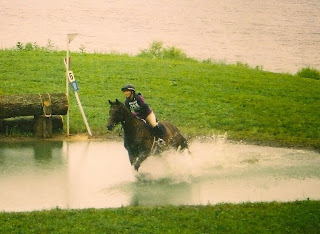 I'm a planner.  I plan everything.  If you come to my office you'll see a dry erase board where everything is organized.  Each client has a box, plus this week's "to-do" list.  My calendar is color coded.  My horse has a calendar where everything is recorded.  You get the idea.  Well the one thing I don't like planning is my show season.  I'm not a hugely superstitious person, but I think writing down your show schedule is just a recipe for disaster.  So instead I have a mental list of shows that I would like to go to.  If we get there, great.  If we don't, oh well.  While I like competing, my horse life doesn't revolve around it.  I'm sure I drive my sister absolutely crazy, because we share a truck/trailer.  And I never like telling her what shows I'm planning on.  But at some point, you have to just say it out loud.  So today is the day.
Lissell and I are entered at Southern Pines I (March 12-13).  Nothing too excited, just Beginner Novice.  But for those that have been following Lissell's story from the past year or so, you'll know what a big deal this is.  But really, it's not a big deal.  At least that's what I'm telling myself.  We're just traveling 8 hours for 5 days to jump 2'6" jumps.  Ok, maybe I'm officially crazy.  But it sounds like a lot of fun.  A bunch of people from my barn are going, and maybe their stories from last year's sunny weather, combined with the dismal forecast for the next week, pushed me over the edge and I entered.  Lissell's first competition since 2005.  Oh yea ... we haven't jumped cross country since then either.  But no biggie.  One quick school while we're down there, and we'll be set.  Right??
Seriously though.  I'm having the best time with Lissell right now.  She's just awesome.  The dressage is what is it, but is getting better all the time.  And the jumping ... well, there's nothing like it.  She's just the best.  That's a picture of Lissell charging through the water back in the day.
Ok, enough gushing.  We still have a few weeks before we leave and a lot can happen between now and then.  Especially when your horse is 19.  But here's hoping all goes well.

Posted by Mythic Landing Events, LLC at 11:38 AM