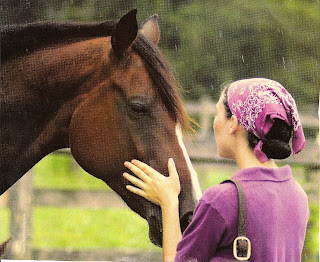 I just received word that my old horse Harry was Reserve Champion in the Thoroughbred Hunter division at HITS Ocala yesterday. This included a blue, red and yellow ribbon in the three classes. Yay Harry! Yay Hillary! Yay Marylisa!

That's a picture of me and Harry that was included in an issue of Dressage Today a few years ago. My co-worker, Stacey Wigmore, had come out to my barn to do a photo shoot about eventing gear, and she caught this awesome shot of me and my Harryman. A few months later, Dressage Today needed a photo for a story on knowing your horse, and viola ... Harry became famous.
Posted by Mythic Landing Events, LLC at 8:55 AM