Riding in the African bush country 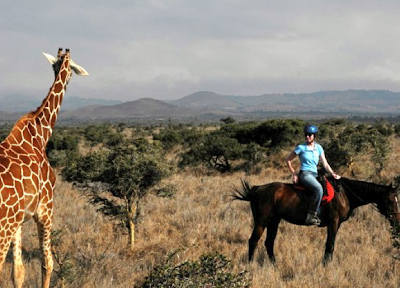 Earlier this summer, I had the incredible opportunity to go on safari in Kenya. I saw just about every wild animal you can imagine, from playful lion cubs to giant crocodiles to menacing but sadly near-extinct rhinos.

But the first animal I saw the morning we woke up in Nairobi, having flown in late the night before, was a horse – a flashy chestnut Thoroughbred type hacking with his rider along Nairobi’s crumbling roads.

Horses in Kenya? It hadn’t even crossed my mind.

I had never gone on safari before, but one of the unexpected things I discovered about it is that you spend most of the time bumping along in an ancient Land Rover. The wild animals completely ignore the cars, and you can pull up within feet of zebra, giraffes, hyenas, pretty much anything except Cape buffalo, mean and distressingly large animals that are known to charge.

If you want to hike, you either need a guide in a car within running distance, or to walk with an armed guard (remember you are walking among lions, cheetahs and leopards!). We did both, and it was a refreshing change from the car’s confines and exhaust. But with us on foot, the animals were wary; we couldn’t get within 100 yards of the antelope and gazelles that were within touching distance from the car.

I quickly realized that the best way to see the wildlife without having to sit in a car was from horseback.

So one day I set off for a nearby barn. It was primarily a polo boarding facility, with a small dusty yard ringed by shedrow stalls. I was introduced to my mount, a bay Thoroughbred named Robot. (Not his actual name. I asked the guys to repeat it twice and always heard “Robot” although it was clearly a Maasai word, not, you know, Robot.)

Robot was about 16 hands, in good weight, with only some minor skin fungus. He was decked out in English tack with a snaffle bridle – Kenya is a former British colony.

Along with my guide, a young guy named David, we headed out from the yard and out into the bush, which is what Kenyans call the wild spaces in the country. I peppered David with questions.

Turnout? The horses are turned out loose in the bush with a guard to keep them safe from predators.

There’s no ring. Where do you ride? Just along the paths trod by the horses. The polo ponies are trailered out to another facility to train. The Kenyan bush footing is really bad because aardvarks dig holes overnight to look for ants, and you never know where the next aardvark hole is going to be.

How long have you been riding? David had been riding for 10 years but never had a lesson.

We hacked among the scrubby brush. We were in northern Kenya, which actually reminds me of the southwestern U.S.; it’s quite arid and dominated by bushy acacia trees, some of them covered in three-inch thorns. You would say the grazing is not good. But there were lots of grazers, and before we knew it, we were riding just feet from a young giraffe nibbling on acacia.

David knew the routine. He urged me to take Robot up alongside the giraffe, who was giving us a little side-eye. As for Robot, he was less than pleased to leave his happy place with his nose up David’s horse’s butt. But I gave him some pony club kicks and soon we were within a few yards of the giraffe.

Turns out it is kind of hard to pose with a wild giraffe. They’re not the most cooperative, and Robot wasn’t really enthused either. The best picture got both of us mostly in the frame, and then we went on our way.

We ended up doing an hour loop through the brush, pausing to watch a family of baboons playing in a grove and to pass through a herd of gazelles. David was happy to have a rider with experience, so we trotted and cantered down the trail where it was broad and flat. I was surprised by Robot’s balance and movement. Even as a rent-a-horse, his Thoroughbred athleticism couldn’t be denied. He was a nice animal.

As we hit a narrow dirt road, Robot perked up, and I knew we were almost home. Once back in the yard, I hopped off at the hitching post and the guys took off Robot’s tack, and he immediately trotted back to his stall without a goodbye.

Well, it was nice meeting you, Robot. Thanks for taking me to see the giraffes.

Suzannah Evans is a writer/editor for Mythic Landing Events.