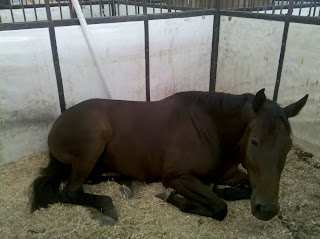 Courtney Cooper was the only MLE client to make the trip down to Georgia for the 2010 American Eventing Championships. Nevaeh (pictured napping in her stall) competed in Novice Horse and Who's A Star ("Tag") competed in Open Intermediate. And they were both awesome! Nevaeh led the weekend with a stellar dressage test and double clear cross-country round, putting them in 2nd going into the final phase. Remember that Nevaeh is still only 4-years-old and has her green moments here and there. Unfortunately, she had a silly rail in stadium which dropped her to 7th place overall. Argh! This talented mare is headed to the 4-year-old Young Event Horse Championships in October, so hopefully she'll have a win there! Tag was stellar once again in Intermediate. He's turning into a real powerhouse and I know that Courtney loves every event she has with him. He finished 13th out of 52 in an extremely competitive Open Intermediate division. Go Tag!

Not to be left out, Katie Wherley's student Lisa Warnock made the trip to compete in the Training Amateur division. If you're from Area II you're familiar with seeing Lisa's name on top of the leaderboard at events. While she didn't win, she had a great showing and is now gearing up for the Area II Adult Rider's Training 3-Day later this fall.
Posted by Mythic Landing Events, LLC at 7:42 AM